What are the radiation in life? 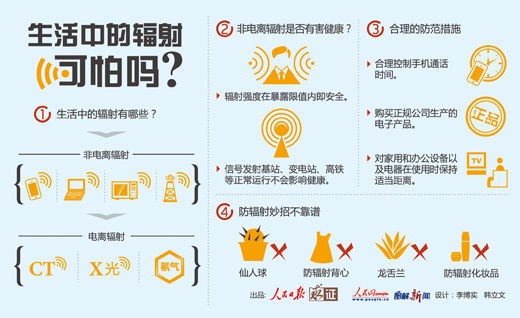 Not long ago, Danish middle school students said that WiFi radiation affected the germination of cress seeds. The reporter interviewed experts found that the experiment was not rigorous, and the normal use of WiFi did not have to worry about radiation.

For a while, radiation has drawn attention. In addition to WiFi, watching TV, using a microwave oven, will it be excessively radiated? Will printers and computer radiation affect fetal development? The telecommunications signal transmission base station is built near the residential building. Is the radiation large? Are these items harmful to health? The reporter continued to investigate and interviewed many experts and scholars from the Mainland and Hong Kong.

What are the radiation in life?

He Xiaoxia said that the public sometimes confuses "electromagnetic radiation" with "ionizing radiation", which creates misunderstandings and brings certain panic.

Is radiation harmful to health?

Non-ionizing radiation energy is low, no need to worry too much; high-speed rail, subway belongs to such radiation

How to determine whether radiation is harmful to human body? Zhao Yufeng, consultant of the National Indoor Environment and Indoor Environmental Product Quality Supervision and Inspection Center, said that in non-ionizing radiation, according to China's "Electromagnetic Radiation Protection Regulations", as long as the actual measured radiation intensity is within the exposure limit, it is safe.

Prof. Li Liyun, a professor at the Li Ka Shing Faculty of Medicine at the University of Hong Kong, a clinical oncologist at the Queen Mary Hospital in Hong Kong and a member of the Hong Kong Radiation Board, said: "Non-ionizing radiation, including electromagnetic radiation, has very low energy and people do not have to worry too much." Central data show that non-ionizing radiation energy is low enough to alter the chemical properties of the substance. Excessive ionizing radiation may be teratogenic, carcinogenic, and mutagenic.

Professor Li Yunyun said that these radiations are very small, and the radiation of each item is different. It cannot be superimposed like an apple plus an orange to measure the total weight. The Hong Kong Environment Bureau also said that there is no international study that the level of electromagnetic fields generated by the simultaneous use of different household electrical products or communication equipment can endanger human health.

Don't worry about electrical appliances, then some large-scale equipment, such as signal transmission base stations of telecom companies, substations of power companies, etc., will it be harmful to health?

For example, Prof. Li Yunyun said that Hong Kong is densely populated and crowded. It is impossible to avoid high-voltage cables, transmitting base stations and substations to be close to work and places of residence. However, there is no high incidence of cancer in Hong Kong. â€œThere is no research literature showing that such radiation does pose a health hazard,â€ Professor Yan said.

According to Su Jinliang, Director of Business and Economic Development of the Hong Kong Government, there are currently more than 26,000 radio base stations in Hong Kong, of which about 60% are located on rooftops or external walls of residential or commercial buildings. The Hong Kong Communications Authority said that in the past three years, the Hong Kong Government has received about 350 complaints about radiation problems at residential base stations, but no base stations have been relocated or removed due to violations of radiation safety standards.

He Xiaoxia said that before the construction of large-scale equipment, environmental impact assessment will be carried out to ensure that the overall level of electromagnetic fields around does not exceed safety standards. The "2012 China State of the Environment Bulletin" shows that the power frequency electric field strength and magnetic induction intensity of environmental sensitive points around the transmission and transformation facilities in China are lower than the limits of the "Technical Specifications for Environmental Impact Assessment of 500kV EHV Transmission and Transformation Projects". The electromagnetic radiation level of the environmental sensitive points around the antenna of the mobile communication base station is also lower than the limit of the "Electromagnetic Radiation Protection Regulations".

Is the radiation protection trick reliable?

Most of them are commercial marketing gimmicks, most of which have no scientific basis; experts believe that there is no need for radiation.

In some people's eyes, the prickly pear and the agave are the â€œanti-radiation devicesâ€ of the office. The radiation-proof vest is a â€œstandard configurationâ€ for pregnant women, but Professor Yan believes that â€œthese equipments are meaninglessâ€ and only the lead clothing can block radiation. But the use of bulky lead clothing in the office is clearly out of place.

In response to various methods related to radiation prevention in the market, Shi Taoyong said, "Many of the arguments are ridiculous, purely commercial marketing gimmicks, and there is no scientific basis." Some people say that radiation can cause skin aging, and now there are anti-radiation cosmetics on the market. "These are all fake things," said Professor Yan.

In fact, many experts do not oppose reasonable precautions, but oppose demonization of radiation. Although there is no comprehensive evidence that electromagnetic waves are harmful to humans, it is best to reduce the electromagnetic waves in the environment to a lower level. Professor Yan said that for radiation-containing items, there is a principle of â€œradiation protection and safety optimizationâ€. â€œFor example, if you use a lot of mobile phones, you can take some methods, use long-line headphones, and donâ€™t put them next to your head when sleeping. Reduce the worries caused by fears.â€ Zhao Yufeng suggested buying electronic products produced by regular companies, paying attention to the radiation data in the test reports of microwave ovens, induction cookers, desktop computers, etc., and comparing them with safety standards. Professor Liang suggested keeping the proper distance between home and office equipment and appliances. Pregnant women, children, and the elderly with low resistance should avoid excessive radiation to prevent possible effects. "In short, in the face of the common non-ionizing radiation in life, we must adopt a scientific attitude. We should not be indifferent or arrogant, actively prevent and treat it rationally."