The price of titanium dioxide has doubled in two years, and the price of furniture will rise.

The PVC pipe to be installed in the house, the white latex paint to be used in the renovation of the new house, the ink for printing, the clothes on the chemical fiber fabric worn on the body, and even a piece of white paper, a tube of toothpaste, a bottle of cosmetics, these seem to come from different The products of the industry will have to face a "white" pressure.

Titanium dioxide prices such as rockets

Since April last year, titanium dioxide has been increasing in price around the world. On April 1 last year, DuPont raised the net price of all specifications of titanium dioxide sold in the Asia-Pacific region by US$300 per metric ton, and then raised the price three times in a row. After the recent price adjustment, according to the data of the commodity data company business, at present, the price of titanium dioxide in the North American market is about 4189-4497 US dollars / ton, which has increased by 195% compared with the same period of 2010.

According to industry analysts, international leading manufacturers have been able to raise prices smoothly, mainly because the international titanium dioxide industry has long-term competition, high concentration of industry, mastery of the right to speak and pricing; in addition, some titanium resources countries limit exports, forming a price increase Cost driven.

The price of paints and furniture will rise.

The price of titanium dioxide continued to rise, which is undoubtedly a serious challenge to the cost of the first major user of the titanium dioxide coating industry, and evolved from raw materials to downstream terminals. According to industry insiders, titanium dioxide has risen, solvents have risen, followed by pigments, resins, etc., and then finished paint products have also increased prices, and the pressure of rising prices for furniture and decoration has followed.

The Metal Dog Chain include the Dog Leash,Dog collar,Dog training Collar,Dog choke chain. Every model of these chains include different size for the different wegith dogs.

We can make the normal welding and Argon arc welding as your demand. Surface is Chrome plated or galvanization. 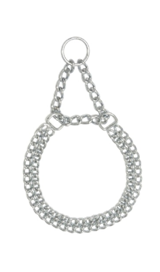