It is understood that this chameleon's "ancestor" is very compact, only 18 mm long, it is amber with two other lizards - one is a gecko and the other is an ancient lizard - all found in Myanmar At that time, this place was a tropical jungle, which is very suitable for them to survive. The discovery has now been published in the journal Science Advances. 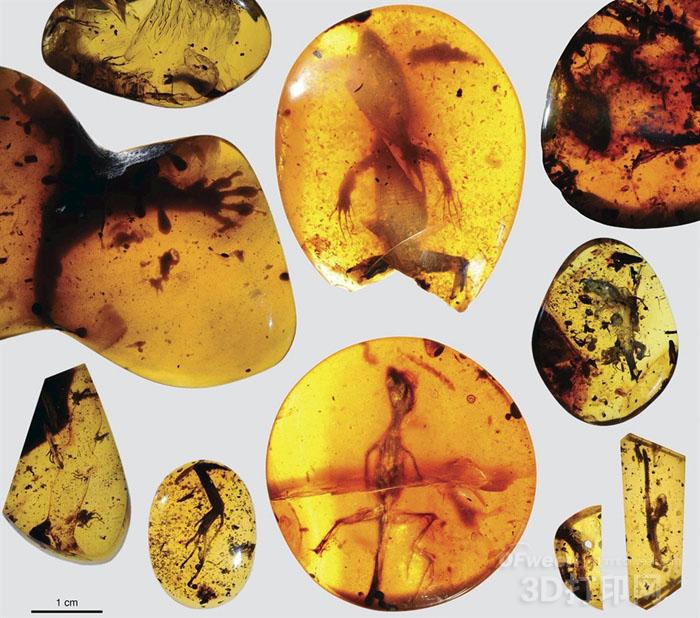 This is an amazing discovery for paleontologists around the world. â€œThese fossils tell us a lot about the species diversity of lizards living in ancient tropical forests,â€ said Edward Stanley of the University of Florida, co-author of the study.

â€œThe current fossil record of small lizards is rare, because their delicate skin and fragile bones are often difficult to preserve, especially in the tropics. This makes our newly discovered amber fossils especially rare. It is a unique window in our study of the critical period of biodiversity."

The result of a 3D scan using a micro CT, in which the bone marked with blue proves that the chameleon at that time has already prey on the tongue.

In order to be able to study this small chameleon carefully and without cutting amber, the team of scientists first used a micro CT scanner to perform a complete 3D scan of their bones, and then they could digitally reconstruct the digital model of the skeleton and use a 3D printer to print it out. This way scientists can better study the physiological structure of these lizards.

â€œThis is very exciting,â€ Stanley said. â€œUsually we usually only find one foot or a part of their body in amber, but this time they are all complete specimens â€“ the claws, teeth, and even the toepad are intact. I am familiar with CT. Technology, so I realized that this is an opportunity to get strong evidence of lizard evolution."

For example, the remains of the gecko showed that the gecko's toe pads had glued at that time, indicating that they developed this trait earlier than expected.

In addition, this little chameleon also revealed some new information. Through the study of its skull, scientists can be sure that its tongue is already the same as the modern chameleon's tongue, and it can be popped at high speed to capture prey. However, it has not yet developed a body shape that is fusion toe or similar to a modern chameleon.

In addition, its emergence also challenges the traditional concept that chameleons originated in Africa. This gives researchers important clues about where these reptiles are located in the evolutionary tree.